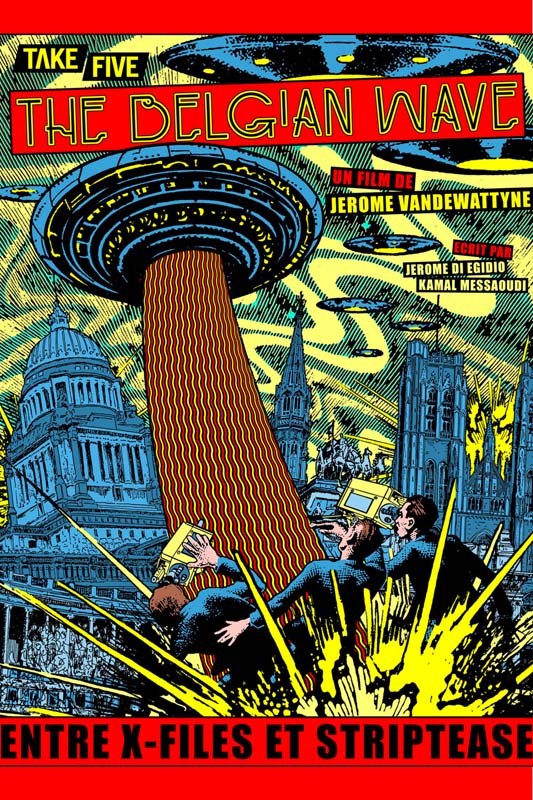 In the early 1990s, a journalist Marc Varenberg and his cameraman disappeared under mysterious circumstances while investigating the Belgian Wave (a series of UFO sightings between 1989 and 1993). Almost thirty years later, two web reporters reopen the investigation to find out what really happened.

“The truth is out there” was the slogan of my favorite science fiction series of the 90’s, X-FILES, which played perpetually on doubt and mystery. This fascination for the strange never left me. Almost 30 years later, the production company TAKE FIVE contacted me to tell me about a project: an explosive cocktail of conspiracy theories, beliefs, belgitude, confusion between reality and fiction; a mix between X-Files and the Belgian TV show ‘Striptease’. ‘The Belgian Wave’ quickly appeared to me as an original and promising film, close to themes that are dear to me: ufology, image manipulation, sects and the quest for spirituality.

Born in 1989, Jérôme spent his childhood and adolescence devouring as many movies as possible. During his high school years, he secretly directs a number of gore short movies in the empty hallways of his catholic school. After high school, he creates the band VHS From Space and starts studying communication at the ISFSC. His end-work is ‘She’s A Slut’, a fake trailer for the BIFFF, who give him free rein in 2012 to direct a short film: the psychedelic trash orgy ‘Slutterball’. The doors of television open before him and lead him to direct commercials and web series. At the same time, he also directs several independent music videos and edits a couple of movie trailers. At 25 years, he gets into the tour van of The Experimental Tropical Blues Band and follows them around for more than 2 years. This experience will give birth to his first feature film, ‘Spit’n’Split’.

Production Company: Take Five
Company introduction: Self learnt, Gregory Zalcman trained on the field. During many years, he plays different roles on film sets, from runner to production manager. But what interests him most is to be at the source of the creative process from its very first breath to its concrete making. Gregory decides to create his first production company in 2003 and then pairs up with Alon Knoll in 2008 to create Take Five. After many short films and documentaries, the company produces its first feature film ‘Emma Peeters’ in 2018, which is chosen as the closing film of the Giornata degli Autori of la Mostra of Venice 2018. In 2020-2021 Take Five co-produced several feature films: ‘Hochwald’ by Evi Romen, ‘Spaccapietre’ by Gianluca and Massimiliano de Serio, ‘The Island’ by Anca Damian, and ‘Misha and the Wolves’ by Sam Hobkinson.
Address: Avenue du roi 52, 1060 Bruxelles
Producer: Gregory Zalcman
Phone: +3225346636
Mail: